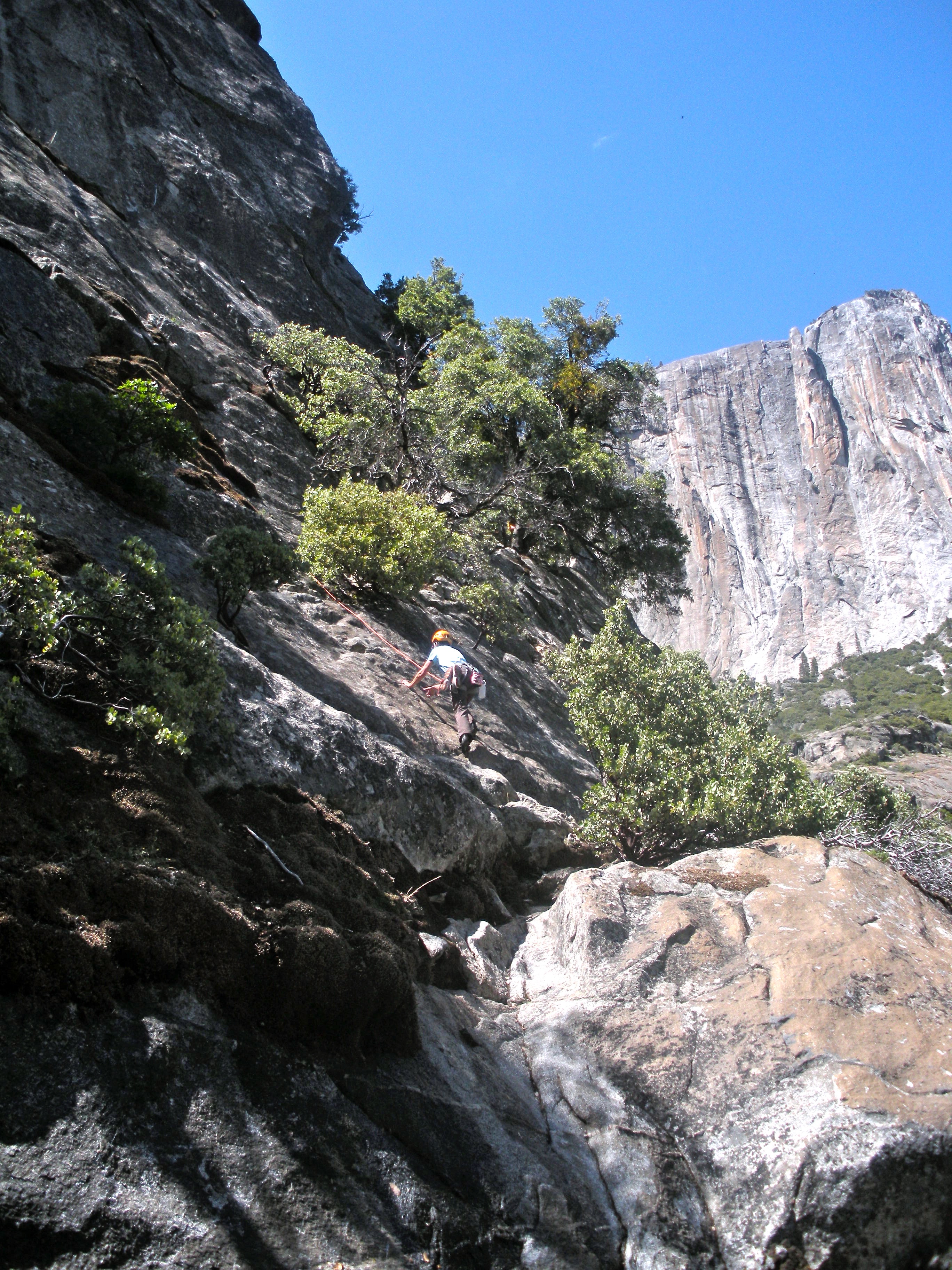 In climbing, “swapping leads” means that the leader and the follower switch roles as they climb a multi-pitch route (“leap-frog” up the wall). When I climbed with my son the first time, we switched roles that way, and our dynamic changed, forever.

This was my first published climbing essay. about climbing a route called Munginella, in Yosemite, with my son. It appeared in “Climb” Magazine, in the U.K. Enjoy!

a Climb of Epic Proportions

“See that, Mom?” my son Alex shouted down to me from his belay ledge on the rock wall near Yosemite Falls.

Not only had I seen the lightning strike he pointed out, I’d noticed every one of the seven or so earlier ones. Not a big fan of electrocution, I pondered the wisdom of continuing our three-pitch climb, but Alex assured me we had plenty of time. Since he practically lives in Yosemite Valley for part of the year, I deferred to his experience — against my own better (parental) judgment.

My peripheral vision caught another flash, on the opposite side of the Valley. A storm had been slowly rolling around the Sierra peaks for over an hour, rumbling like an empty stomach.

I squinted upwards. The flake I was arguing with stood out from the wall about a foot or so at its gaping bottom. Too wide to reach around, too high to step over, too everything. I stood there and talked to myself far longer than my son had the patience for, I knew, although he never said so.

I tried again. Fell again. Another raw knuckle to ignore. The damn flake was beginning to make me doubt my meager credentials — if I couldn’t get over this little thing, I was no rock climber. I was fooling myself; I didn’t belong out here. No matter which angle I tried, which movement, the next holds were just centimeters out of reach.

Crack! Another bolt, on our side of the Valley this time. “Come on, Mom, you got this.” His voice was a study in control. Was he trying really hard, for me, or was he always this nice to every newbie gumby climber he happened to be saddled with?

Crack! Blinding this time, right next to our climb!

In a few seconds that I have absolutely no memory of, I was over the flake and moving really fast. I was rock climbing. All it took was an act of God.

A feathery, insistent rain followed me up the rest of the pitch. At the belay ledge, as we exchanged gear for the last pitch, it tickled our faces, chilled us. I didn’t voice any of my fears about the possibilities, unwilling to make them real.

As I belayed Alex up, the rain slackened. The worst is over, I thought as I balanced on the fast-drying sandy ledge.

Did I say newbie?

As I followed him up the last pitch, the sky blackened and rain began pelting my back, drumming on my helmet. After a few holds that turned out to be less slippery than I’d feared, I thought, Okay, I’m wet, but this is easier than I expected. I can do this. No biggie.

Once I reached the top, my instinctive choice was to just curl up tight against the wall and wait it out. Then another bolt struck nearby. Alex had no trouble convincing me to try the walk-off, even though it was now a rushing river of mud.

I come from a place where summer rain is soft, inviting, a tease to the senses. This was icy whips that startled and battered. We slithered slowly down the trail, as much on our butts as our feet, grabbing whatever we could to keep from sliding off.

After a few dozen meters, I thought, I can do this. This is okay. I pictured standing on flat ground again.

Then Alex stopped. I couldn’t hear what he said over the pounding, roaring rain. He pointed ahead. The wide granite slab that the trail crossed gleamed under the rushing water that covered it. Completely. No question of getting across such a waterfall.

“We’ll have to rappel,” he shouted over the roar.

I couldn’t believe I’d heard him right. Was it safe to rappel in driving, freezing rain? I was too new to know. I’d just learned to rappel, had done it once. I looked straight down; definitely too far to scramble through the brush. We’d only descended about one pitch. Another loud Crack! helped make up our minds.

While Alex anchored us to a pair of rappel rings, I tried to keep my teeth from chattering too hard and to remain vertical in the rushing mud we stood in. I did try to get my harness ready, but my hands were shaking too hard to be of any use. The rest of me wasn’t good for much either. I just stood there, like a clueless toddler, as Alex attached the rope to my belay device. I vaguely remember apologizing. I knew I should have been doing something, but couldn’t get my fingers to cooperate.

Me? First? Did he really know what he was doing? I couldn’t get my chattering teeth to form the words, so I just followed his instructions.

He’d found a relatively empty, straight section of wall for us to lower down, secured my rope, checked my knots, done everything. He was good. All I could do was shiver as if I was going to shatter. All I could think was, My son does this all the time. Just another day at the office.

“You know what to do?” he shouted against the wind.

I nodded, grabbed the rope, turned around and stepped off. The one time I’d rappelled hadn’t prepared me for this. My feet skidded around in the mud. Each time I braked the rope, water spurted up from the sponge that the rope had become. Icy water tossed in my face did not help my concentration.

By the time Alex reached the ground beside me, the rain had stopped. Chastened, humbled and exultant, I waited for him to untie and coil the rope, and we headed back to the base where we’d left our packs sitting between a tree and the wall.

I saw red as we approached. And green, and black. Some kind of long, vivid-colored snake had curled up on the wall to dry out — right above our packs.

Neither of us knew what it was. Neither of us wanted to find out the hard way whether it was
poisonous. Alex went first, dashed between the tree and the wall, grabbed his pack on the fly and kept running. Really fast. The snake didn’t move. I followed. We stopped, breathless, and put on the packs for the walk down.

When he’s home, Alex still calls me Mom, and still follows some of my rules. But we both know who’s in charge when we go outdoors together