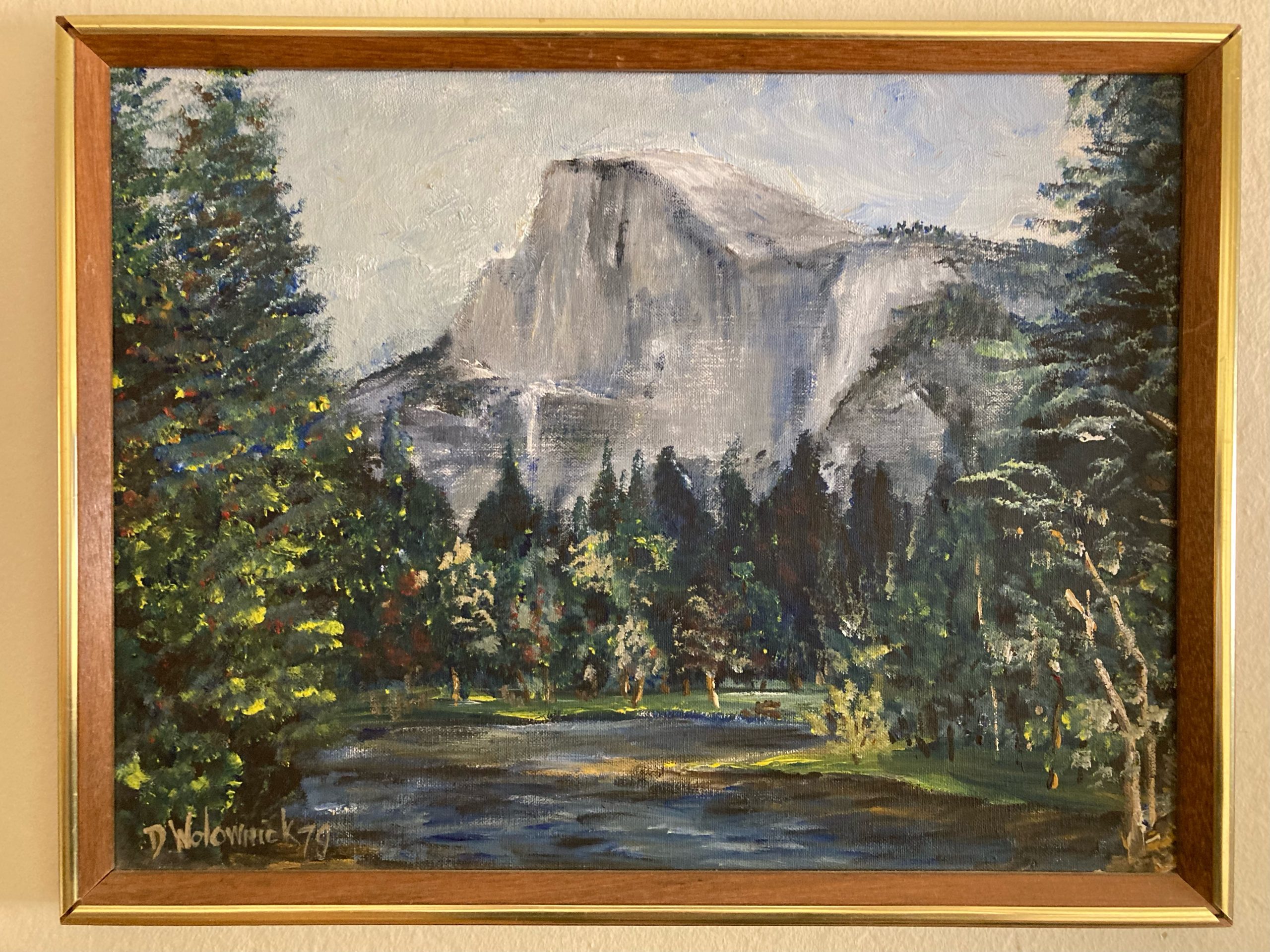 or, Painting the Past

I ran into an old friend a few weeks ago, for the first time in many years. While we chatted, catching up, he mentioned a painting that hangs in his living room. I painted it, back in another lifetime, and gave it to him as a wedding present in 1979.

That time of my life was turbulent, stressful and completely overwhelming. I had no recollection either of the painting or the wedding. Not his fault; memories from that time in my life were eclipsed by my new marriage, new home, moving to a new part of the country, a new job, new family… then a new country. The whole decade (or more) is a blur.

Since I keep an archive of my work, but didn’t have that one, he  sent me a photo of it. Here it is:

If you’ve been to Yosemite, you recognize Half Dome, one of the national park’s iconic rocks. That year, 1979, my husband took me there for the first time. It was one of my his favorite places.

Clearly, it made an indelible impression on me then, and still does, each time I drive into Yosemite Valley. My husband passed away in 2004, and just a few years later I began learning to climb rocks. Not quite like my son Alex; no one will ever give me awards for the kind of climbing I do! But the first year that  I began going outdoors to climb real rocks (as opposed to just climbing in a gym), I climbed Half Dome with my son. It terrified me, exhilarated me — and it took me until this high (the third pitch) to muster the courage to turn around and check out the view:

But once you’ve hung on the side of a wall of those dimensions, fingered each hand-hold (of which there aren’t many, on that smooth slab of rock!), dug in with your toes to keep from succumbing to gravity, it becomes something much more. The day we climbed it, Alex and I, was an education. I learned to dig deep to find resources I didn’t know I had, and to ignore the fear that clamored for my attention. Well, maybe not “learned,” exactly, but at least, started to learn. First steps. Baby steps.

When I did that painting for my friend, I didn’t know Half Dome. It was just a pretty rock that looms over Yosemite Valley — as it is, I suppose, for most people. Worthy of the brush strokes I granted it, impressive for sure, but just… pretty.

So here’s your rallying cry:

Feel alive! — Go visit your mother, Nature! She knows what you need, like any loving mother. Turn off the screens, the devices, and go visit, even if it’s just a little green park in your neighborhood. Nature holds the key to your well-being, wherever you seek Her out.

Let Her take care of you. You deserve it. And She’ll teach you  things about yourself that you need to learn.

4 thoughts on “Go Visit your Mother”